The Instruments of Peace

Today, we will highlight a little liturgical trinket which we call The Instrument of Peace, Portapaz or Oscularium which are as descriptive of a name as those paintings called "Child with a chair" that contain quite rightly: a child and a chair.


It is the Instrument of Peace because it is used during the part of the mass in which the Peace is ritually required in order to proceed with the Eucharistic celebration.  That part where you normally turn to you neighbor and shake hands or kiss them as a signal that you do not hold grudges, or if you did, you forgive them so that the Peace of the Lord is manifest and all can proceed to take communion... having "forgiven our debtors" ... (Hint: It's in the 'Our Father'!) 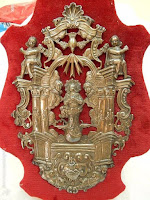 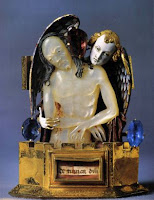 It is often a piece of embossed, carved, bejeweled or embroidered panel which is kissed by the priest and taken round to others to kiss also.  Hence, it is called an oscularium (osculo=kiss in Latin).


In the back it has a protuberance in the form of annulus or hook so the cleric who carries it ("the symbolic peace of the Lord") can better handle it without dropping it or faltering in his grip. 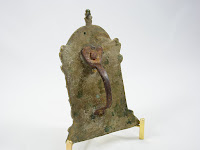 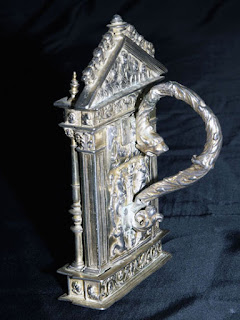 There are quite beautiful examples of it, and indeed its use spread at certain points to different rites across Christendom.  It has been used in England, in Italy, France, Germany, and of course, Spain and its places of influence in the New World. 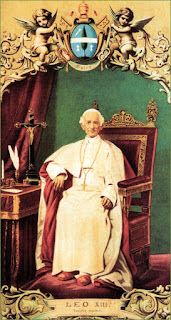 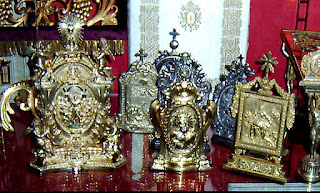 Its use stems from the particular solution in our GotHispanic Rite, and its Mozarabic branch, to conveying the peace during the Feriae from the celebrating priest at the altar, to our family or our representatives occupying the second-floor tribune at the western or northern end of the nave or transept.   Conveying the peace with a Portapaz via a cleric in his surplice (or further with an esclavina or manteo too if privileged as an Almoner) then allowed for the 'ritual peace' to be taken from the celebrant's lips, and  up the stairs to the tribunes of our particular chapels, without the priest or his ministers needing to exit the sanctuary nor the persons in state descending - which would cause unnecessary distraction to the rest of the faithful for an ordinary day.  In our rubrics it demands that it only be used on the Feriae, and not on the memories, feasts or solemnities, when instead of the tribune we occupy part of the choir. Since time immemorial, however, it has become customary to use it on these other occasions too since it is easier to have the cleric pass in front of the prie-dieus and offer the Portapaz in succession without anyone having to stir much as done for the Communion; everyone else present gives and receives the peace in the customary manner. 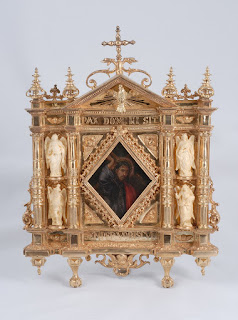 As occasions demand, sometimes two instead of one Oscularium is used to carry the peace to those in the Choir: one for those on the North and another for those in the South.  This is especially the case where the the men and women segregate on specially solemn occasions.  Four Portapaces are used thence where nuns occupy one choir or enclosure and monks the opposite one at a monastic basilicas catering to communities of the both sexes, which in essence constitute a double transept or choir so all may do as the Deacon proclaims in a loud voice in our rite: "Quomodo astatis, pacem facite!"   = As is your state/Where you Stand, make peace! 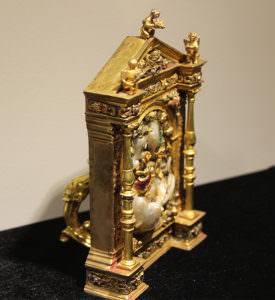 In yet other places it is now taken to a specific spot and people line up to kiss it - which is a new invention.  In the other rites, however, the command to give each other the sign of the peace is not as specific as in ours.  In either case, lining up to kiss it treats the instrument of the Peace as a relic, and though the object is often carved with images, scenes and representation of God, Saints and Holy things, it is not a reliquary nor is the purely-ornamental image to be venerated.  The object is supposed to convey the Peace in a manner that is less disruptive to the liturgy, not to become a distraction.  We hope these things are taken into consideration, though obviously each particular culture and setting should provide for its own norms, and the rest respect them as long as they do not deviate from the central teachings. 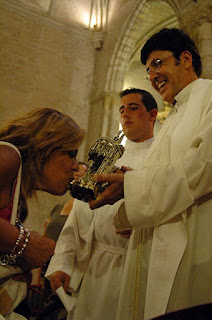 In any case, we have it held with the left hand, and wiped with a linen towel held on the right hand. In the Roman Rite, those privileged to use it by papal dispensation from the 16th century on, hold it with a humeral veil instead: So with all that,  Peace be with You!

As our nuns from San Pelayo sing:

Posted by KLAVE CENTESCA at 3:33 PM No comments:

Pontifical Gauntlets are one of those things we do not see too many of these days... so we are always happy when we have the opportunity to make some.  These pairs are on their way to Hungary.  We couldn't wait any longer to share the story though, since it highlights what we enjoy doing best: learning about history and making new things which can relate to the past so traditions survive at least on our watch.


The purple ones we hinted at before on social media, and here they are: 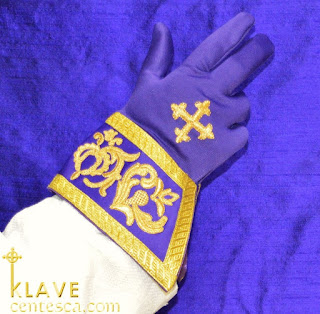 The design of the cuff, because they were made for the Hungarian Church, we thought it would be nice to find inspiration in some of their beautiful vestments from the past.  Looking through the various collections, we found this:

It is a gold chasuble embroidered with tiny seed pearls using the traditional Hungarian tulips motif.  It even has amethysts and other jewels running down the centre - making it quite literally, a "planeta pretiosa" or precious chasuble which begs the question: where is the matching precious mitre?!

The said chasuble is unlikely to be worn with the pontifical gauntlets we have made at Klave Centesca, but if we had to find inspiration, where best?  Instead of pearl embroidery, we have used the raised goldwork which is more traditional for these liturgical gloves worn at pontifical masses, and we are quite happy with the effect of them.  But with custom work... the possibilities are quite endless.

Here's a couple of different projects from the past:

And a guide to some of the styles:

Does your bishop have pontifical gloves? 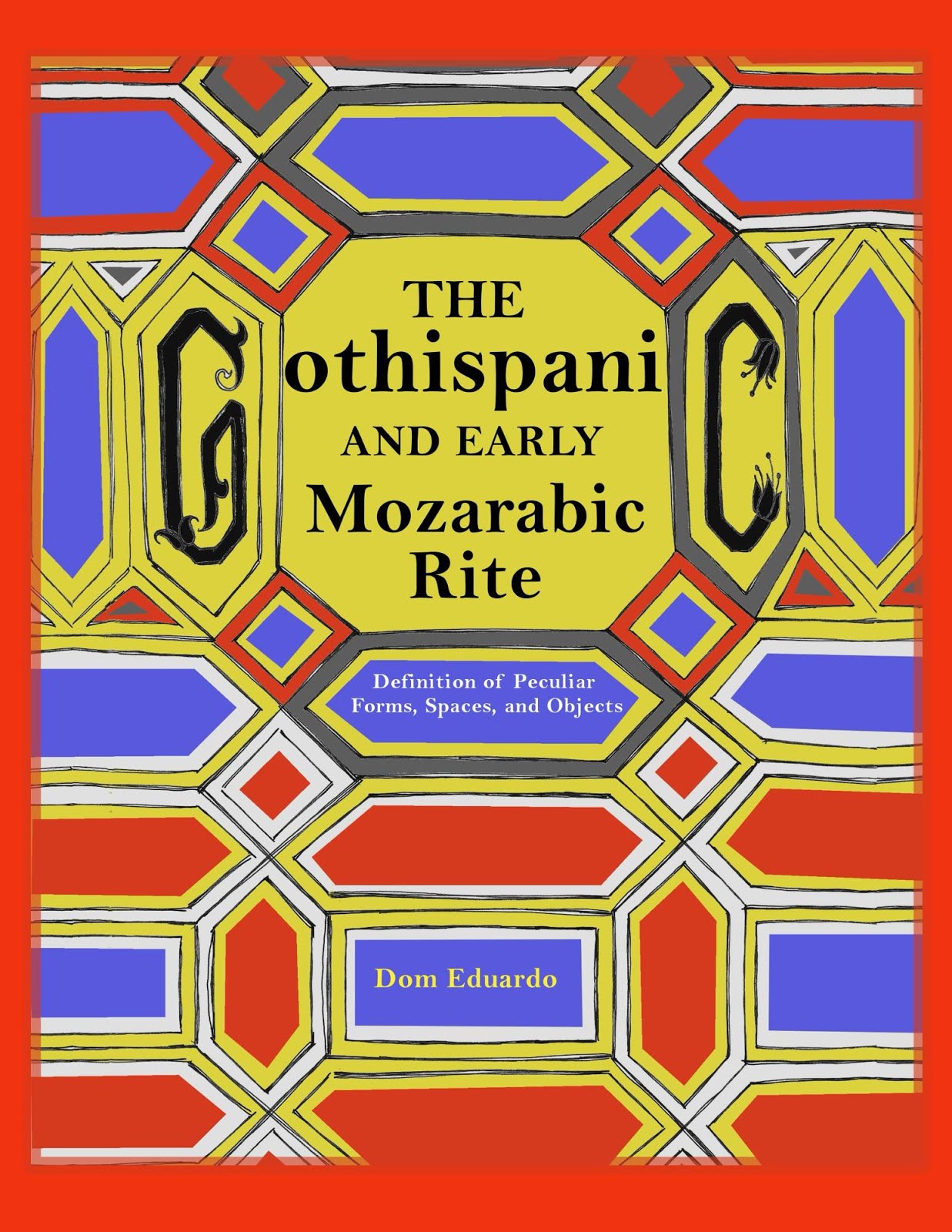